In 2008, Emmanuel & Sheila Senesie founded the Sierra Leone Christian Mission in the village of Baiima, Sierra Leone in West Africa. Both Emmanuel and Sheila are originally from Sierra Leone. They come from families where both parents and close relatives are Muslims. They received Christ as their Lord and Savior and were baptized at Riverdale Baptist Church in Upper Marlboro, MD in 1981. 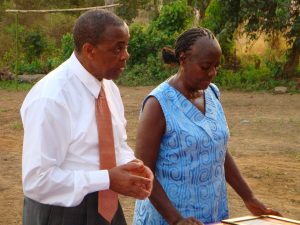 After organizing and leading short-term mission trips to Cape Town, South Africa; Port Au Prince, Haiti; Harare, Zimbabwe and Saltillo, Mexico, they felt led by God to take the gospel to their country of birth.
Their passion is to share the gospel of Jesus Christ at home and anywhere God leads them.  Emmanuel served as chairman of the Missions Ministry at his church, Woodstream Church from 2002–2006 and is presently a Deacon. Emmanuel & Sheila have led bible studies and facilitated married couples’ classes.

Emmanuel is a Civil Engineer. He worked for the Washington Suburban Sanitary Commission (WSSC), and retired in 2011 after serving there for over 33 years. Sheila retired in 2007 after working for the U.S. Congress and the University of Maryland, College Park. They now serve as full-time missionaries to Sierra Leone.